A native Liberian, Sammed Okyne arrived in the United States in 1997. After mastering his management skills at Penn State University returned to Philadelphia in 2013 and saw an opportunity to introduce residents of southwest, Philadelphia to African cuisine and culture by opening up Kings and Queens African Cuisine. In 2018, Sammed rebranded to Kings and Queens Liberian Cuisine and decided to take it the next level.

With a Philadelphia Magazine Best of Philly award and more than a few celebrity endorsements backing him, Sammed has set himself apart with his social media ingenuity, unwavering dedication to his craft, and an amazing menu full of aromatic dishes you won't find in traditional African inspired eateries. 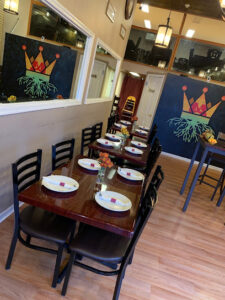